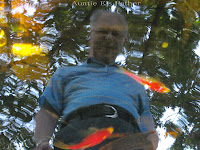 I really Love going to Dad's. He has a fish pond. We (Dad and I ) put the pond in. I remember the fun time we had doing it. Let's see that was about 10 years ago. Made different updates to it since the first time. Now Things are falling apart and Dad stated he did not want to continue it. his word were" When the fish die that will be the end of the pond.". He had not been the same since Moms death Two and a half years ago.
I thought I would post a video and some pictures.
The photo to the left above can be click on for a closer look. it is Dad's reflection in the pond. He is looking at the fish, I took this and then turned it around so one could see dad's reflection.

This is the Frog fountain I bought for their Pond some years ago. 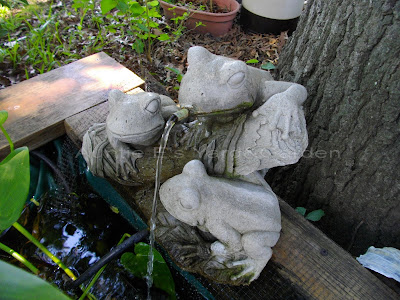 He had many fish in the pond.
These are the ones still there.
Mostly Coy fish now. 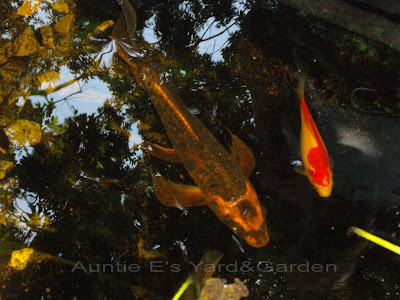 I remember years ago he had some Coy's. One year they all disappeared. We thought a cat got them. Because, the Neighbor stated a wild Cat was attacking his.Dad wanted to check this our before getting any more. I was out looking at the Pond and swore I saw a dark one swimming in there. Mom and dad were sceptically due to the fact they had not been feeding any for a long time and dad never had any dark ones. Well that got my daughter searching for it. Low and Behold there was one. It was not one that Dad had put in the pond. Our guess was that the coy fish had babies and this one survived! It was a Black Coy we called it Shadow, because it really did look like a shadow in the pond. Shadow grew to have some color on him, making him look gold. Shadow died last year, he was always a favorite of the family's.

Here is a video of the sounds and views of Dad's Coy pond.
Posted by Auntie E at 8:21 AM 2 comments:

Still visiting Dad in Virginia Beach. The back yard has a lot of plants. Through the years they have developed into these wonderful Rubies.
You can click on all the photos to enlarge for better viewing.


Dad in the backyard. 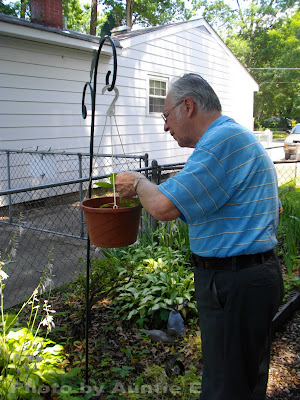 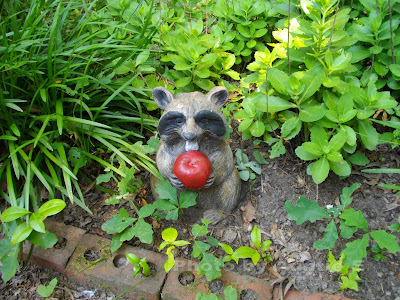 This plant is over twenty years old. It was taken from my Grandmother (the Seamstress) home. My Mother brought it to her home after the death of Grandpa. She planted it in this pot and there it has remained. Dad brings it in the house to winter and then moves it out in the spring. Never did bloom at Grandmothers home, but it has always bloomed here. 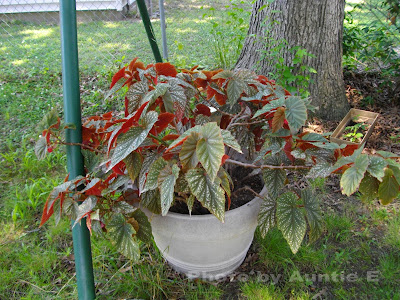 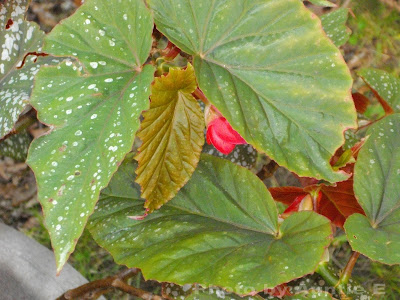 This is an old trowel. We used them to prepare the gardens for planting. I have one at my home however, Dads is in better condition. These are rare to see nowadays in our area. Most people who have them use them as ornaments. 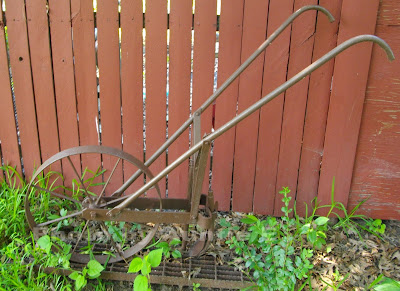 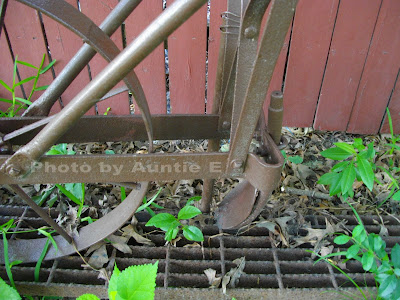 Well as you can see some are not plants...but I will say they have developed into wonderful rubies also!
Please leave your link so we will be sure to visit you.


For more rubies visit Work of a Poet
Posted by Auntie E at 7:21 AM 9 comments:

Over the weekend we went to the Eastern shore for a surprise sweet 16 party. The girl is a friend of ours. We have known her and her mother for over Six years. Heather goes on vacations with us to give my daughter company. Being an only child is sometimes lonely and hard when on vacations. She has become part of our family! So we were excited about this Party. The ride was about 1 hour from our home.


The girls are waiting for the Birthday Girl. We hid out in the pool house. 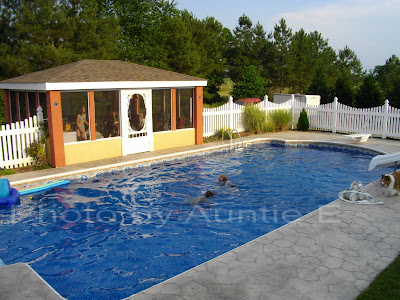 It's a water slide! 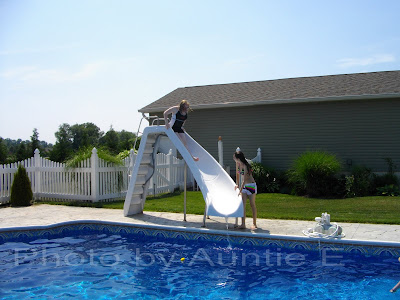 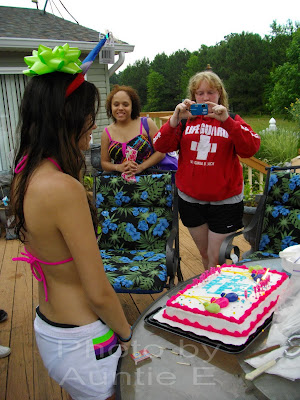 This meme is sponsored by Mary over at Work of a Poet . To see more Rubies from around the world check out her link. Or you can link your own Ruby Photo, just make sure it has a ruby in it and the photo is from your camera lens.
Please leave your link here. This is explained in my comments info.Spammers will be deleted immediately!

Come join Music Monday and share your songs with us. Rules are simple. Leave ONLY the actual post link here and grab the code below and place it at your blog entry. You can grab this code at LadyJava's Lounge Please note these links are STRICTLY for Music Monday participants only. All others will be deleted without prejudice.


PS: Because of spamming purposes, the linky will be closed on Thursday of each week at midnight, Malaysian Time. Thank you!
Posted by Auntie E at 8:41 AM No comments:

Ruby Tuesday- A Light and the Wild

Sounds like a book title huh.... glad you stopped by. First the Light.

The photo below is a light a purchased for the Gazebo. by day a loving Red Geranium plant.
By night a wonderful Soft light. I will try to get a photo for later in my,
"It's Night in Auntie E's Yard" post. Summer is coming and the night time is always glowing in our yard. There's a lot of Night Activities. 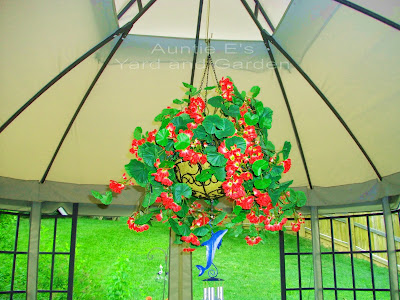 Now for the Wild..... There are some wild Strawberries in my yard. I love the ground cover.
This is under my Rosemary bush. I love to use the rosemary in all kind a recipes. 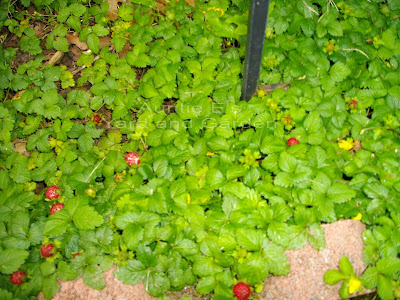 A few years ago we discovered Wild Raspberries growing in an area. We decided to leave them alone and now we have a lot of them. They are just beginning to ripen. Can you see the rubies waiting to be harvest soon 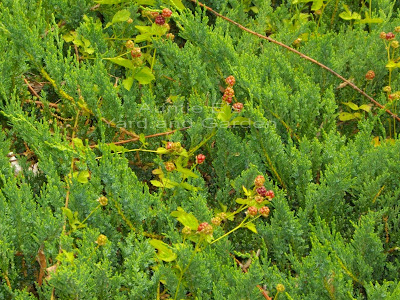 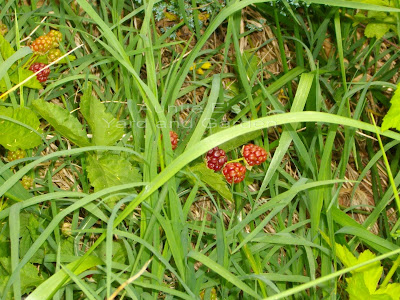 One more Ruby for you to view. We are in the mist of a Mural being Painted. You can learn more about it Here. 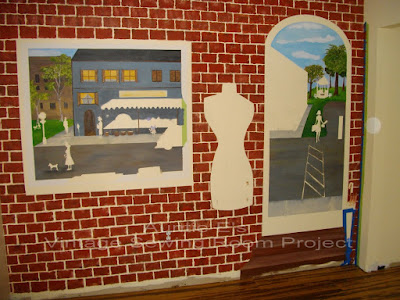